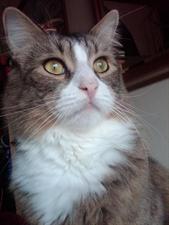 The Value of Routine Physical Exams for Our Pets

One of the big concerns in the veterinary community at this time, is the declining number of cats that are receiving regular veterinary care. As more cats have become indoors-only, we cat owners have become complacent about the health of our kitties. Yes, they don't have problems such as being hit by cars in the road, fighting with other neighborhood cats, or being attacked by dogs, but they are now living long enough to have other health problems. Many of these health issues can be favorably improved with veterinary intervention.

A  problem with my own cat  really brought this issue to the forefront for me. I routinely take  my pets into our hospital every year for a thorough exam and vaccination assessment. When I am at home with them, I want to be a pet owner and cuddle with them and play with them, so I do not do exams at home or otherwise poke or prod at them to check this or that. I don' t want them to be worried that I'll do veterinary exams on them at anytime at home. However, one evening after I had just fed everyone their dinner, my big, beautiful, fluffy 5 year old tabby stripe and white kitty, "Moo", began with blood tinged liquid diarrhea while he was eating. My husband noticed first and alerted me. I went over to Moo, picked him up and began to examine him while he wiggled and squirmed to get down from my lap and back to his food bowl. My limited exam revealed a firm structure in the middle of his abdomen. I was scared for him, and  immediately placed him in his carrier and took him into the hospital for an X-ray and bloodwork. These tests revealed a round mass in the center of his abdomen of some size. Now, I knew this was a tumor of some variety, none of which were good news. I also know I do not like to be the doctor to my pets when there is a problem, I am too emotionally involved. My next course of action was to call the referral hospital in Annapolis and take him there for an ultrasound exam and a consult with the surgeon. He was scheduled for surgery on the second day. I and my entire family were on pins and needles with anxiety for our Moo Kitty. The surgeon called me after his surgery to tell me that he had made it through surgery, had required a blood transfusion,but was now in recovery and doing well. He then told me that the bad news. The mass involved the lower small intestine, his cecum (a structure similar to our appendix), and part of his colon. It had extended into the regional lymph nodes also. He had removed over a foot of intestine and colon, the lymph nodes, and a portion of the omentum ( a membranous covering around the intestinal tract). He had submitted them to the University of Colorado's diagnostic laboratory for a pathology diagnosis. We knew the prognosis was grim as the main differentials were various malignant cancers of the intestinal tract. The path lab would give us a diagnosis of the type of cancer, an indication if the surgical margins were free of cancer cells, and the involvement of the lymph nodes.

Moo made out like a champ during his recovery! He actually ate a meal of his favorite canned food that evening. He had some diarrhea over the next couple of days, but that even began to clear up very quickly. He was discharged within 2 days, but I brought him back to recuperate at our hospital until  his sutures were removed. Within 5 days I found out that he had malignant mast cell cancer. The surgical margins were free of cancer cells, but as we expected, the lymph nodes were positive for abnormal cells.

Now it was time to make plans for further treatment. Knowing that his lymph nodes were  involved, we knew he would need chemotherapy if we had any chance for a good outcome. There is not much in the literature regarding any good treatment of this disease in cats. Most articles that I read reported 2 to 4 months survival. I was heartsick at the direness of his situation, but kept up my research. I found an article published by a veterinary oncologist in Canada that reported the results of a particular study where one of the kitties was still doing well at 4 and 1/2 years after surgery and chemotherapy. I contacted this oncologist by email and received a very prompt and kind reply outlining the chemo  protocol that he would recommend and an invitation to stay in touch with him if I had any questions. Thus the second phase of the journey began.

He was to receive an  intravenous chemotherapy treatment every week for 4 weeks, then a treatment every 2 weeks for four more treatments. Now, I do not take chemotherapy lightly. The basics of chemotherapy is to give medicine toxic enough to kill rapidly growing cancer cells but safe enough for less rapidly dividing regular body cells. This is a fine line to walk. We do chemotherapy for pets at our hospital, so I have experience in how to handle these potent medications, and to know what side effects to expect and how to deal with them. I also know from experience that pets make out very well. It is rare for a pet, cats in particular, to lose their appetite, vomit, or otherwise feel unwell. It is a much better scenario for our 4 footed creatures than for us humans.

We started his chemo treatments and he made out great. He would have breakfast before riding with me to the hospital. He would have his blood counts checked before treatments, and they improved every week. His anemia and elevated white blood cell counts normalized. His least favorite part was having a small intravenous catheter placed in a vein in his leg, but as it was only needed for a short time while he received his treatment, he was tolerant. After treatment, he was able to have a nice yummy snack of his favorite canned food and some treats, which he always ate with great relish. (He is not a cat to miss any meals!) This was followed by a nice cosy cat nap for the afternoon. I would take him home with me after work and as expected he was ready for his dinner, and later his bedtime snacks. He also has monthly ultrasounds to evaluate for any return of the cancer. These will continue at routine intervals for the rest of his life. So far it's looked very good. His weight is good. He loves to play with us. He seems to be back to normal, but we will be vigilant.

The point I would like to make, is that cats can have serious disease with minimal symptoms until it becomes advanced. I am a veterinarian and my pets receive an annual exam every year, but this occurred to my cat. I know there was no palpable tumor in his abdomen when he had his exam in August. I also know that in May when he was first diagnosed, there was a significant tumor present. I was complacent and in error by assuming that at 5 years old, he is a young cat and bad things probably don't happen until old age. We need to realize that pets age 5 to 7 years to one of our human years. This means that if we only have our pets checked over once a year, it's like us people only seeing our doctor every 5 to 7 years. Lots of things can happen in that time! The new recommendations of having a 6 month wellness exam for our pets make sense. If I had taken Moo in for a 6 month wellness exam in March, I am certain this tumor was developing and by finding it earlier would have made his surgery easier and improved his long term prognosis. I won't make that mistake again with my own pets, and I am going to be a loud and strong advocate for a 6 month wellness exam for all pets.

I know how much my family loves our pets. Our household revolves around them. They are all special and bring us a lot of entertainment and joy. I see the love between my patients and their owners and know how very important these little guys are to all of us. Pets get almost all the same types of diseases and conditions that we humans develop. Cancer is one of my top diagnosed conditions in cats and dogs. They also have all kinds of other diseases that if diagnosed early enough, can be treated and many times cured.

Will Moo be ok? I don't know, time will tell. I do know that he is loved every day of his life, and we will be on high alert for other developments. Hopefully he will be a survivor. He does have a great  and strong little spirit.

Let Moo Kitty be the spokes kitty for getting cats into the veterinary clinic for routine well exams. He has been through a lot in the last few months. Yes, he made it look easy, but no one would have wanted to trade places with him. He is a brave Moo boy, and hopes that his bravery can be pivotal in promoting 6 month wellness exams for other pets. Mark your calendar for your pet's exams, not just the annual exam but every 6 months for wellness exams!  Your four-legged, furry little guys will thank you for it with years of love and companionship.